The Rinat Akhmetov Foundation and DTEK passes on 30,000 rapid tests to Dnipropetrovsk Region to detect coronavirus

The Rinat Akhmetov Foundation and DTEK transferred 30,000 rapid tests to Dnipropetrovsk Region to detect COVID-19. Today, on 14 April, cargo with rapid tests was delivered to Dnipro and Pavlohrad.

These tests take 15 minutes to analyse, so rapid testing is currently the main tool for doctors to quickly identify the disease and contain the epidemic further.

"In order to protect Ukraine from the global coronavirus pandemic, Rinat Akhmetov has joined the efforts of the Rinat Akhmetov Foundation, FC Shakhtar and businesses of SM Group. In total, Rinat Akhmetov sent 300 million UAH to fight the coronavirus. At the end of March, 300,000 coronavirus rapid tests were purchased and delivered to Ukraine. This is the contribution of the Rinat Akhmetov Foundation to the Stabilization Foundation created by the President of Ukraine Volodymyr Zelensky. These are highly accurate and quality rapid tests. They are very easy to do. Thus, in just 15 minutes a person with symptoms is given the testing results. It is an effective tool for curbing the growth rate of the epidemic. And now, at this point, this is exactly what Ukraine needs," Natalia Yemchenko, a member of the Supervisory Board of the Foundation, said.

According to Dmitry Murashko, Metinvest representative, member of the Regional Headquarters fighting against coronavirus, the company, acting in the interests of Ukraine, is taking urgent measures to counter the spread of epidemic. 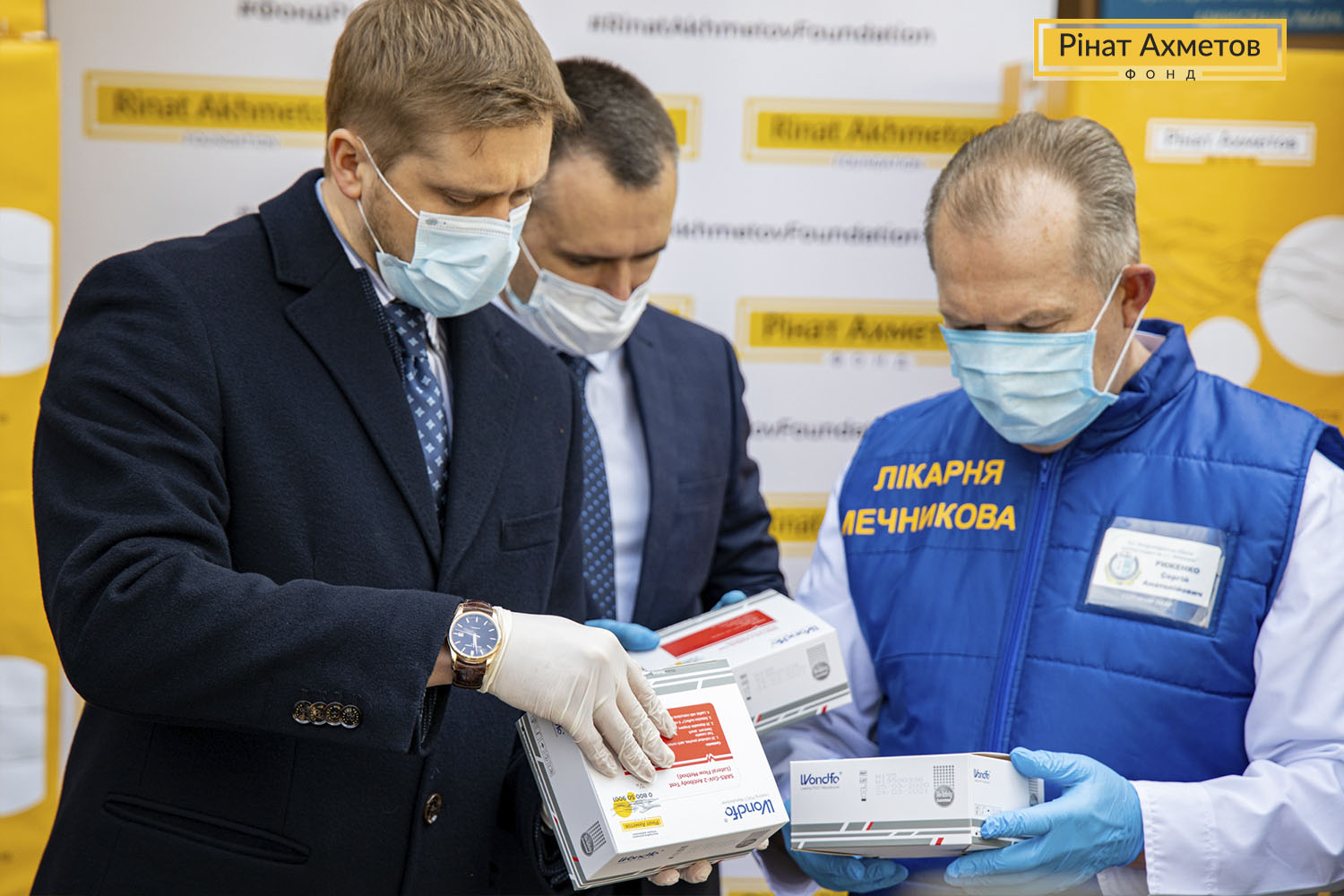 "Cooperation with regional and city headquarters allows us to work more smoothly. We help not only hospital bases in the region. We provide necessary funds to rural medical and obstetric centres and district hospitals of Dnipropetrovsk Region," Dmitry Murashko said.

Oleksandr Savenko, a DTEK representative at the regional headquarters combating against coronavirus, personally passed on certificates for 30,000 rapid tests to Oleksandr Bondarenko, Chairman of the Dnipropetrovsk Regional State Administration. The tests will be distributed among 16 state medical institutions in the region.

"DTEK Pridneprovskaya and Krivorozhskaya TPP, DTEK Pavlogradugol, DTEK Networks and DTEK RES operate in the region.  Therefore, as a socially responsible business, DTEK understands how important it is to support not only the employees of enterprises but also the entire region.  "We are convinced that we may only solve the problems that Ukraine faces in this emergency through joint efforts," Oleksandr Savenko explained.

Oleksandr Bondarenko noted that now the region is fully provided with rapid tests.

"We are very grateful to receive 30,000 tests. And this is not the only help from the Rinat Akhmetov Foundation and SCM Group. We have already received personal protective equipment and are expecting the next batch of aid," Bondarenko said.

"We really appreciate all the help that saves lives. This is how we can defeat the coronavirus. 200 people are admitted to the admission ward of Mechnikov Hospital. In this situation, rapid tests are aimed for a quick diagnosis and further ways to treat a patient," Serhii Ryzhenko explained.

A few hours later, 9,400 rapid tests were delivered to Pavlohrad for the cities of Western Donbass, where DTEK Pavlogradugol operates.

"We are helping in the fight against coronavirus and will continue to do so in our region. I am convinced that highly accurate tests will help solve this problem. We will we be able to prevent the spread of pandemic in the region only through joint efforts of representatives of the community, business and government. Together we will cope with this problem," Serhii Voronin, General Director of DTEK Pavlogradugol, said. 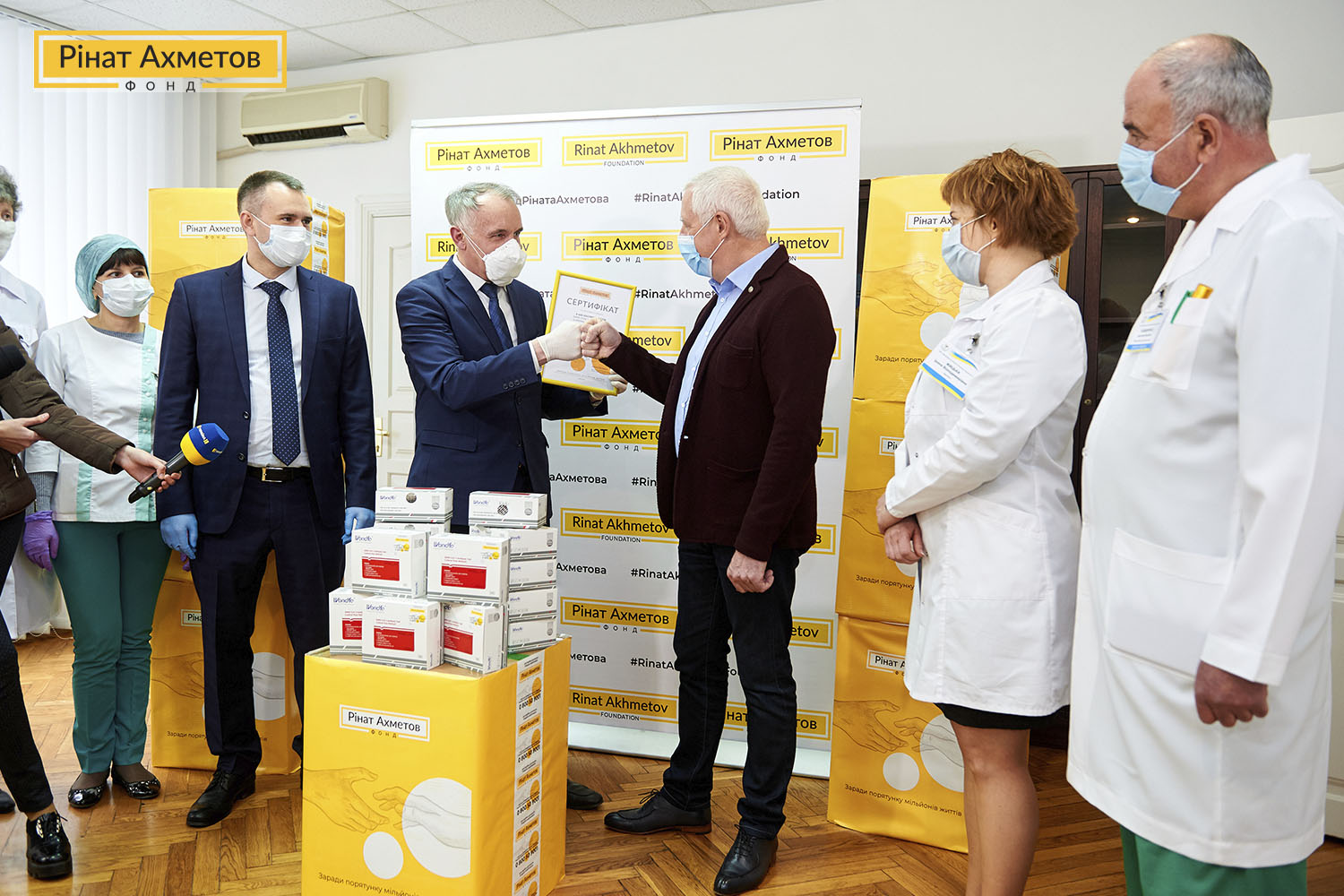 Mayor of Pavlohrad Anatoliy Vershyna stressed that the city is now fully provided with rapid tests thanks to this assistance.

"We managed to buy only about 50 rapid tests and they, indeed, were extremely necessary. 5,000 tests from the Rinat Akhmetov Foundation will be enough for the healthcare sector of Pavlohrad. We really appreciate your assistance," Anatoliy Vershyna said.

He was agreed on by the city's medical staff.

"We thank the Rinat Akhmetov Foundation and DTEK for this timely and modern assistance. It is very crucial to us," Iryna Zhytska, Chief Physician of Pavlohrad City Hospital No. 4, said.

Back in February, Rinat Akhmetov was the first in the country who gave directions to the Foundation to respond to the global threat of a coronavirus epidemic. The equipment to effectively treat the complications caused by COVID-19 – the Swedish SERVO-I UNIVERSAL and SERVO AIR high-end ventilators and oxygen concentrators – has already been purchased and transferred to the Ministry of Health.

In partnership with the Ministry of Digital Development, the Rinat Akhmetov Foundation created educational TV-series for teachers (“Quarantine: Online Services for Teachers”) and schoolchildren (“Digital Physical Education for Schoolchildren with Sport Stars”).  Video courses are posted on the Rinat Akhmetov Foundation's Facebook page and Youtube channel.