Today, on 13 April, the Rinat Akhmetov Foundation and Chief Executive in charge of urban development at Metinvest Holding, the SCM representative at the Regional Headquarters combating  coronavirus, Oleksandr Vyshniakov, sent another 50,000 rapid tests to detect COVID-19 to Donetsk Region. They have already been delivered to logistics centers in the cities of Donetsk Region. Then they will be transported to state medical institutions.

Taking into account the first tranche, the region received 100,000 rapid tests from the Foundation, which are currently the main way to quickly detect and isolate infected patients and prevent the epidemic. According to experts, these tests should be enough to control the threat of coronavirus spread in Donetsk Region in the following months.

"Rinat Akhmetov has sent 300 million to help Ukraine in the fight against COVID-19. Back in February, he set up a task-to respond swiftly to challenges and in close cooperation with the Ministry of Health to provide systematic assistance to the country in the fight against the epidemic. The Rinat Akhmetov Foundation purchased equipment to treat  COVID-19 complications effectively. The Foundation has already transferred 300,000 rapid tests to the Stabilization Foundation, created upon the initiative of the President of Ukraine, which will help detect the virus quickly and stop it from spreading. Now the tests are being delivered in batches to the regions. Furthermore, the representatives of Rinat Akhmetov's assets joined the Regional Headquarters to fight coronavirus in Donetsk, Luhansk, Lviv and Ivano-Frankivsk regions, as well as the headquarters in the cities with our branches in Zaporizhzhia, Dnipropetrovsk and Kharkiv regions. We may handle the epidemic only by joining our efforts," Natalia Yemchenko, a member of the Supervisory Board of the Foundation, said.

"Last week, jointly with SCM, the Rinat Akhmetov Foundation  handed over 50,000 rapid tests to Donetsk Region. We are now dealing with another 50,000 thansfer. And the total of100,000 tests to diagnose coronavirus will be sent to hospitals throughout the region. Metinvest, upon the initiative of Rinat Akhmetov, DTEK and some other companies have assosiated with regional anti-crisis headquarters to combat COVID-19 in four regions of Ukraine, including Donetsk. The Headquarters unites the efforts of local authorities and businesses. Now our common big task is to stop the spread of coronavirus and help businesses survive in this difficult economic situation.  Without doubt, this is not easy, but the economy of the region and the country should also be healthy and have 36.6°C temperature," Oleksandr Vyshniakov said.

"Every city in Ukraine is in  emergency when related to the coronavirus epidemic. And now our hospitals are receiving such urgent, necessary and critical rapid tests. This is an invaluable help. We express our sincerest gratitude," Oleksandr Brykalov thanked.

Yanina Vatulina, representative  of the Donetsk Regional State Administration Health Department,  also thanked Rinat Akhmetov for helping the region. Since the coronavirus epidemic is a serious challenge that can only be overcome by joining the forces. 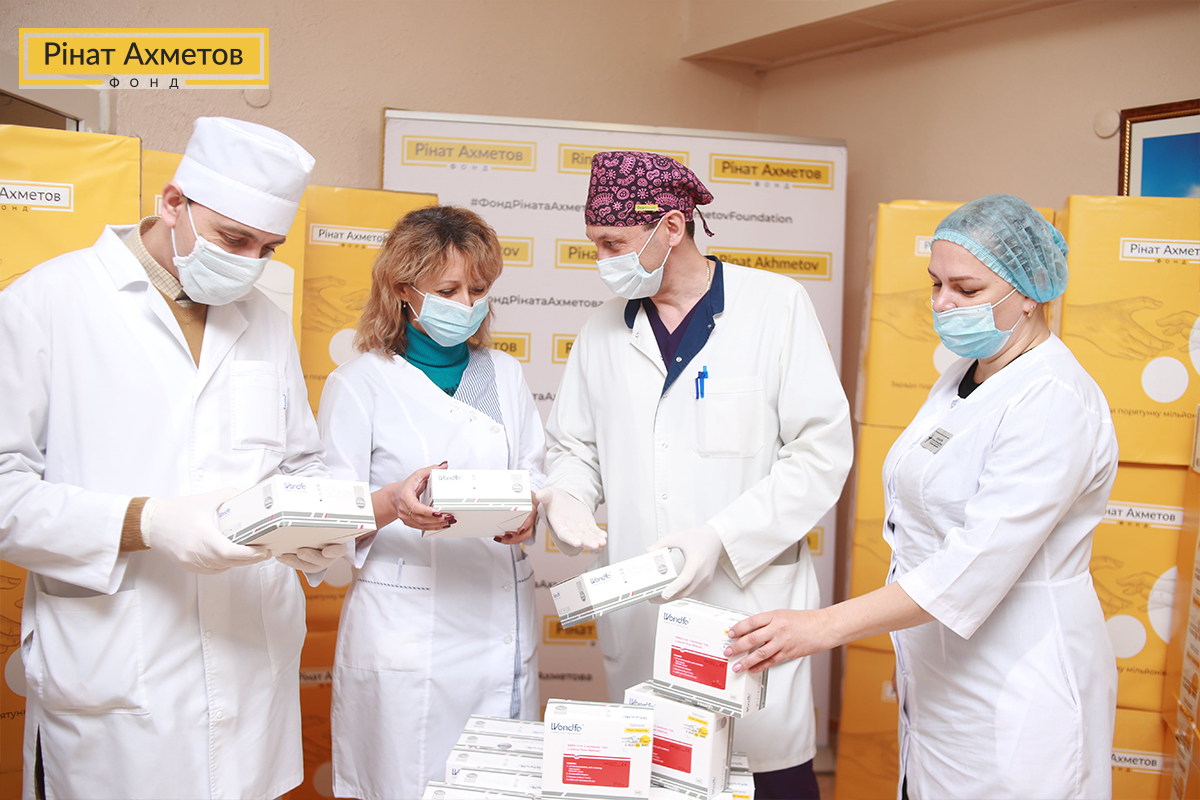 "The availability of rapid tests will allow doctors to identify the incidence within 15 minutes. We are incredibly grateful to Rinat Akhmetov and the Foundation for their timely assistance," Yanina Vatulina said.

The first aid tranche, which the Foundation transferred to Donetsk Region on 7 April, has already been distributed among state medical institutions in 25 localities. Roksana Khokhlova, Chief Physician of the Myrnohrad Central City Hospital Communal Non-Commercial Enterprise, told how they operate:

"Several patient examinations have already been conducted. The results are negative, and are very happy about that. Rapid tests are important and necessary. And now we have no doubt that any patient encounter, any situation with COVID-19 that needs to be resolved with these tests is not an issue. We really appreciate this!

"I would like to thank the Rinat Akhmetov Foundation for its assistance in combating the coronavirus. I know that even getting rapid tests is a great challenge. All countries compete with each other for them. And our city received 2,400 tests owing to the Foundation. This is necessary and important for us. The Mine staff and residents of Pokrovsk see that they were not left alone with this disaster. This means that we will show a real miner's nature and will definitely overcome all the troubles. 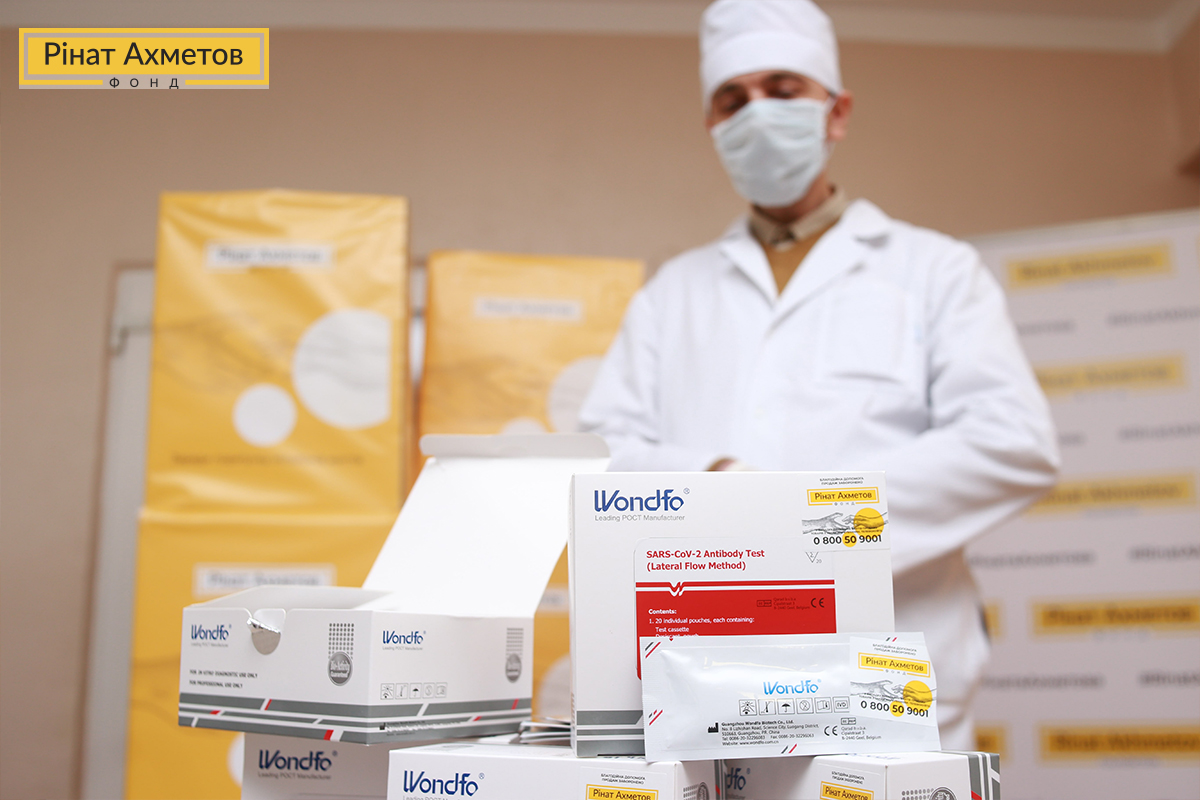 Back in February, Rinat Akhmetov gave directions to the Foundation to be the first in the country to respond to the global threat of a coronavirus epidemic. The equipment to effectively treat the complications caused by COVID-19 – the Swedish SERVO-I UNIVERSAL and SERVO AIR high-end ventilators and oxygen concentrators – has already been purchased and transferred to the Ministry of Health. .

In partnership with the Ministry of Digital Development, the Rinat Akhmetov Foundation created educational TV-series for teachers (“Quarantine: Online Services for Teachers”) and schoolchildren (“Digital Physical Education for Schoolchildren with Sport Stars”).  Video courses are posted on the Rinat Akhmetov Foundation's Facebook page and Youtube channel.