The Rinat Akhmetov Foundation and Metinvest passes on 30,000 rapid tests to Zaporizhzhia Region

Today, on 9 April, the Rinat Akhmetov Foundation and the Zaporizhstal (Metinvest Group) handed over 30,000 rapid tests to  Zaporizhzhia Region to detect COVID-19.

These days, rapid tests are the main way to quickly detect  the infection and prevent the epidemic.

"This is part of the unprecedented and large-scale assistance that Rinat Akhmetov has been providing to Ukraine since February. To prevent the coronavirus epidemic, he financed 300 million UAH that were to solve the main medical needs of the country. They were determined and coordinated with the Ministry of Health of Ukraine, and purchase of rapid tests were a top priority. In the shortest possible time,  the Founder gave directions for the  Rinat Akhmetov Foundation to purchase, ship and transfer 300,000 rapid tests to the Stabilization Foundation initiated by the President of Ukraine. Once distributed by the National Health Service in an urgent order, they become available for public hospitals in different parts of Ukraine. This week, rapid tests from the Rinat Akhmetov Foundation have already been received in the Kharkiv, Donetsk and Luhansk regions. And today, the Foundation has brought 30,000 tests to  Zaporizhzhia Region. They will be distributed to main hospitals in the region," Natalia Yemchenko, a member of the Supervisory Board of the Foundation, said.

"The Rinat Akhmetov Foundation and Metinvest are well aware of the scale of the epidemic and any possible consequences from it. We all live in the context of quarantine, we all worry about our loved ones, our jobs, and our future. The epidemic can be stopped only if we join the forces. I mean we need to unite the regional leaders, business, doctors, and region residents. Everyone can contribute to the victory over the virus. As Metinvest, DTEK, and other companies do. As Rinat Akhmetov, who was the first to help Ukraine in the fight against coronavirus in February," Oleksandr Myronenko said.

Vitaliy Turynok thanked Rinat Akhmetov in return for his help that is equally required by both doctors and residents of the region.

"In the near future, citizens of Zaporizhzhia will be able to pass testing in hospitals. This is very important for the residents of the region as this will allow timely diagnosis of the disease. Medical equipment, personal protective equipment and test systems are in high demand all over the world today. We really appreciate Rinat Akhmetov's support," Chairman of the Zaporizhzhia Regional State Administration said.

30,000 rapid tests purchased by the Foundation will be distributed among 101 regional public health institutions, depending on the needs. In particular, over 16,000 tests will be sent to medical institutions in Zaporizhzhia. 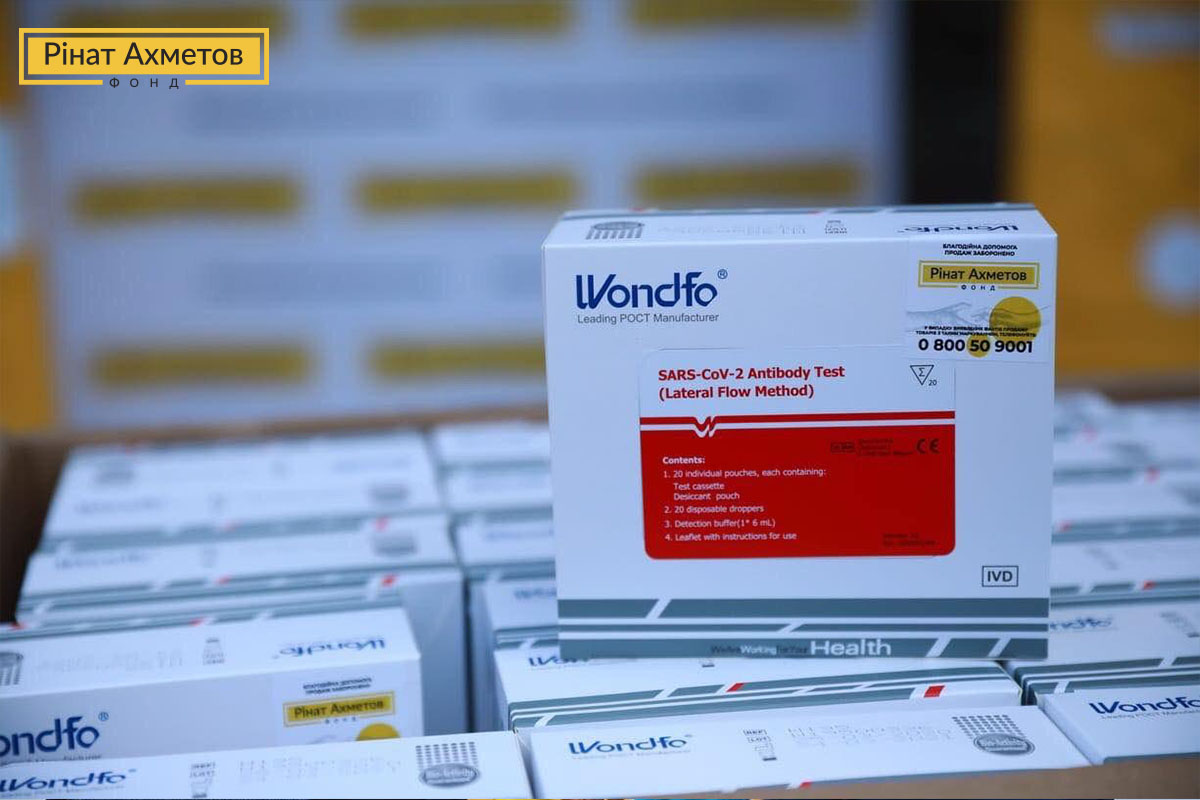 According to Acting Director of the Zaporizhzhia Regional Laboratory Centre of the Ministry of Health of Ukraine, Chief Sanitary Doctor of the region, Roman Terekhov, rapid tests that are the quickest method to diagnose the infection.

"We as epidemiologists regard timely diagnosis and isolation of patients to be the critical factor in preventing the epidemic. And the 30,000 tests received today will be enough to control the threat of spreading the epidemic in the next six weeks. This assistance is crucial," Terekhov explained.

On 6 April, the Rinat Akhmetov Foundation and FC Shakhtar transferred 20,000 rapid tests to Kharkiv Region to detect COVID-19. This region was the first to receive part of the batch of 300,000 tests purchased by the Foundation for all Ukrainian regions.

The very next day, on 7 April, the Rinat Akhmetov Foundation and Metinvest passed on 50,000 rapid tests to Donetsk Region.  15,000 of these were received by the medical staff of Mariupol.

Back in February, Rinat Akhmetov gave directions to the Foundation to be the first in the country to respond to the global threat of a coronavirus epidemic. The equipment to effectively treat the complications caused by COVID-19 – the Swedish SERVO-I UNIVERSAL and SERVO AIR high-end ventilators and oxygen concentrators – has already been purchased and transferred to the Ministry of Health. .