The results of a sociological survey held by Kyiv International Institute of Sociology (KIIS) in June 2019 show that over 95% of the Ukrainian population* are aware of Rinat Akhmetov’s charitable projects. The Foundation is the leader among the top three charitable organizations, staying ahead of even the International Committee of the Red Cross in terms of popularity indicators. 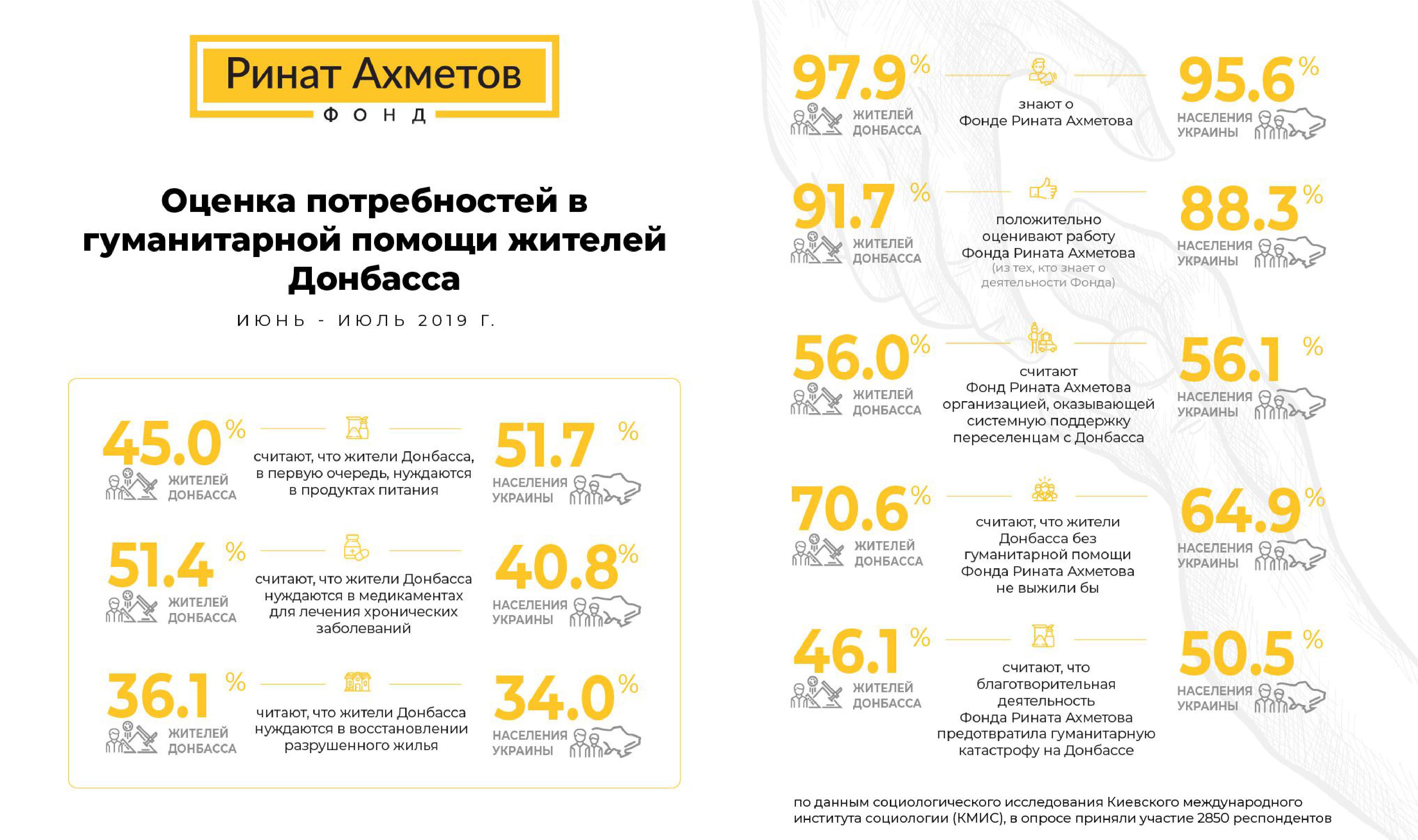 According to the survey, 98% of respondents in the government-controlled territory of the Donetsk and Luhansk Oblasts are aware of the Rinat Akhmetov Foundation’s efforts.

In addition, almost 60% of Ukrainians named the Rinat Akhmetov Foundation the largest private charitable organization in the country. Over 90% of Donbas residents have positive opinion about its activity.

Amid the UN reports on the declining presence of international and Ukrainian humanitarian organizations in the east of Ukraine, the Rinat Akhmetov Foundation remains the leading charitable organization providing help to the Donbas region. At the same time, more than half of Ukrainians believe that Rinat Akhmetov’s charitable efforts were the most important factor that prevented humanitarian catastrophe in that region.

“People living along the confrontation line continue to experience hardships, sometimes not having food and not being able to reach the nearby town, a pharmacy or a store. That’s the people for whom the Rinat Akhmetov Foundation continues to work. Every day, they are provided help with what they need the most. These efforts have already helped save more one million human lives,” Tetiana Kukhotska, the Foundation’s Director for Projects Development said.

According to KIIS’s sociological survey, 65% of Ukrainians believe that people in the Donbas would not have survived without humanitarian aid from Rinat Akhmetov.

Tetiana Kukhotska also stressed that more and more people in Ukraine are becoming aware of the Rinat Akhmetov Foundation’s activities. While in late 2017 – early 2018, 77% of the country’s and 76% of the Donbas population knew about the Foundation (according to data by KIIS), in 2019 these figures rose to 95.6% and 97.9%, respectively.

From the very outbreak of the armed conflict in the Donbas, the Foundation focused all its efforts on helping civilians. The Rinat Akhmetov Foundation’s largest program – Humanitarian Center – provides support to the most destitute residents of the Donbas region victimized by the armed conflict:

– Peaceful Summer to Children of the Donbas: close to 4500 children received summer recreation and psychological assistance;